Since the last update was posted, the world looks a little different. Although last March most of us transitioned into working from home, our Lidar scientists Xianxin Li and Cissi Lin remained from home at the McMurdo Lidar facility throughout the entire Antarctic Winter season working to continue collecting data and operating the systems. Despite… Read More

One of the many beautiful sights surrounding our town is Observation (“Ob”) Hill. Hiking to the top, beautiful views of McMurdo station, Scott Base, and Arrival Heights surround us. The cross was left as a memorial to Scott and the members of his team who died on their return from the South Pole.… Read More

One of the scientific outreach / community engagement events at McMurdo Station is the Wednesday Night Science Lecture series. Dr. Chu gave an hour long lecture titled “A Decade of Shooting Towards the Stars- What Have We Learned?” The rest of our Arrival Heights team, Xianxin Li, Jackson Jandreau, Cissi Lin, and I (Amanda Steckel)… Read More

Mark Tolbert and Chris Haimberger from Toptica have met us in Antarctica! They will stay for 8 days to help us upgrade equipment and improve performance from our toptica lasers. We are operating these lasers, designed to work in well-controlled optical labs, in an extreme environment. We have to put a lot of care and… Read More

We enjoy taking colleagues from McMurdo base up to our lab for the occasional tour. Arrival Heights is an Antarctic Specially Protected Area (ASPA). Permits are required to enter the area and the amount of time we spend in the ASPA is tracked. This status is primarily maintained to keep the region EMI quiet –… Read More

Yesterday, we received replacement pumps for our Sodium Doppler Lidar’s YAG laser power supply chiller. First, we set up a testbed in the Crary lab field staging party area to set the pump we received to 60 psi. We then installed the new pump along with a motor, two water filters, and one transformer back… Read More

The Polar Star arrived in McMurdo sound this week. The ship is driving around the channel breaking up the ice for cargo ships that will follow and bring supplies for the winter season. Watching the ship ram the ice is a lot of fun. After the ice breaks up, seals coalesce around the newly formed… Read More

One of the main challenges our group faces is predicting the weather. Specifically, predicting when the clouds will clear from the top of Arrival Heights and allow us to collect data. We operate in optical wavelengths that can’t penetrate through clouds, unlike other types remote sensing instruments like radar. So at the start of every… Read More

The most surreal experience since we stepped off the plane was counting down the new year wearing sunglasses in the bright sunlight. At McMurdo base, they hold the largest music festival on the continent- Ice Stock. The official festival merchandise (scrawled on a hand-made cardboard sign) was BYO T-shirt so that the carpenters can paint… Read More

Merry Christmas! From December 22 to Christmas Eve on December 24th, we had clear skies and collected 50 hours of data. Working with our PI, we also did training sessions on the principles of how different components of the system work. On the iron lidar, we identified ways to correct the laser spectra on the… Read More 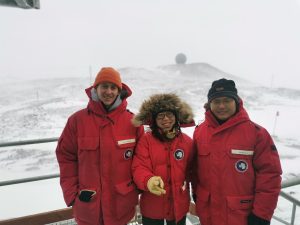 CIRES Fellow Dr. Xinzhao Chu’s research group has been using sophisticated, custom lidar systems to study the upper atmosphere at McMurdo Station, Antarctica since 2010. Typically, students are deployed to the ice for 13 months at a time to operate the systems and study the region where the atmosphere meets space. Students thus do something most scientists don’t do: spend wintertime at the bottom of the world—braving temperatures down to -60 F, and periods of total darkness. The team uses their advanced equipment to make new discoveries about clouds, the atmosphere—and beyond (out to space). A lot of work goes into running such a long observational campaign in a remote location like McMurdo, but the scientific discoveries and unique environment make it all worth it.