Guest post by NOAA scientist Joshua “Shuka” Schwarz   To accomplish the science goals of Atom, every scientific instrument on the NASA DC8 is tenderly cared for. In the case of the Single Particle Soot Photometer (SP2) an instrument for quantifying black carbon aerosol concentration, this care includes gentle heating after cold nights, frequent laser… Read More

On August 3rd, the ATom mission moved on from Alaska to Kona, on the big island of Hawai’i.  The schedule allowed for two days on the ground in Kona, and for many of the crew, this allowed a much welcome day off. CIRES/NOAA scientist Jeff Peischl was able to squeeze in a day of sight-seeing:… Read More

The ATom mission is officially underway!  But not without some minor technical difficulties…   Following the first test flight, the DC-8 crew reported a “humming” sound that seemed to emanate  from one of the sampling inlets on the starboard side of the aircraft. The crew subsequently flew several additional check flights to find the source of… Read More

The NASA Atmospheric Tomography (ATom) mission is ramping up. With only 9 days left until our first science flight, the instrument teams have been busy this last month installing their equipment on the NASA DC-8 in the hangar at the Armstrong Flight Research Center (AFRC) in Palmdale, California. Palmdale is located in the high desert… Read More 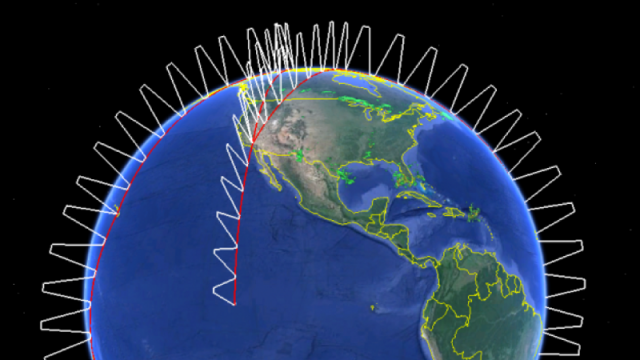 In less than one month, science teams will begin descending upon the NASA Armstrong Flight Research Center in Palmdale, California to prepare for an ambitious project that will nearly circumnavigate the globe collecting measurements of greenhouse gases, reactive gases and atmospheric aerosols from NASA DC-8 aircraft. The Atmospheric Tomography Mission (ATom) aims to study the… Read More

Around the World in 26 Days

This summer, NASA’s DC-8 flying laboratory will soar up and down through the atmosphere around the world to study air pollution, greenhouse gases, and more. Chelsea Thompson (CIRES scientist at NOAA), AKA Iron Lady, will be aboard. Follow her and her colleagues here.